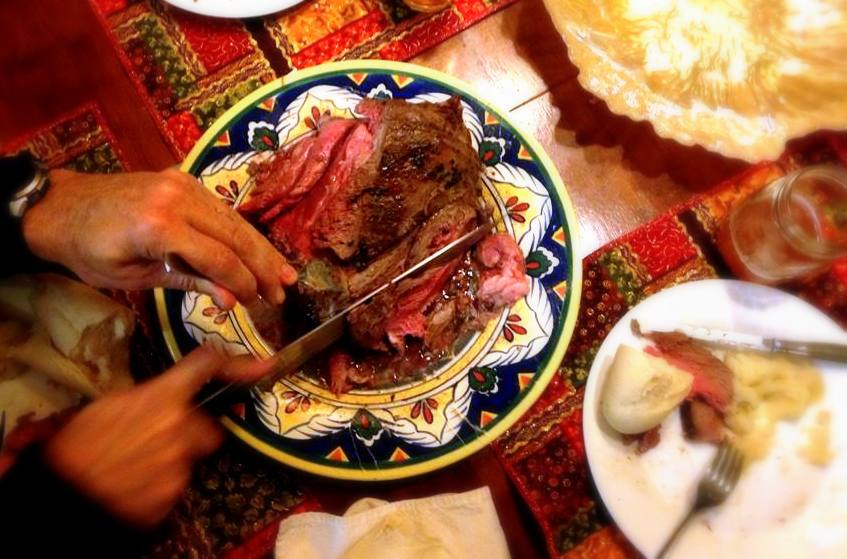 If you are eating lamb that looks gray and over-cooked then you are not eating it the French way. So what is the French way? Rare and pink translates to well done in France. Make sure to cook it that way, (rare and pink) because you will not believe how much better it tastes and how moist it will be-trust me. I did not like lamb before I made this and I cannot wait to try some other lamb dishes-like those listed at the end of the post. We had our lamb with a mash of potatoes and turnips, french bread and some specialty beer to go along with the lamb-a real pub meal.

Order the Leg from the butcher ahead of time; the leg should be sawed off at the extremity of the shank, just above the knuckle joint- the section of the pelvic bone removed. Correct carving is impossible due to the interfering presence of the pelvic bone. Count from 10-12 minutes per pound depending on the degree of doneness (from 45 minutes to 1 hour and 10 minutes should encompass both extremes (size being taken into account) and from 15 minutes to 1/2 hour of relaxation in a warm place (this time is necessary for relaxation).

1 teaspoon crumbled mixed herbs (thyme, oregano, savory or other herbs you like)

Mix the herbs and the seasonings together. Pierce the roast deeply and repeatedly on all sides with a small, sharply pointed knife, directing it on a bias toward the bone, each time forcing a small pinch of the seasoned herbs deeply into the vent with your finger, rub all over with olive oil, pour over the wine, and turn over the roast in its marinade several times over a period of a couple of hours or so.

Wipe it dry with a towel, rub it again with olive oil, seasoning it with salt and pepper, place in a shallow dish, just large enough to hold it, and start it at 450 oven turning it down to 375 after about 10 minutes. Begin basting after about 1/2 hour, first only with the fat drippings (or with a bit of olive oil if they are too sparse), then 10 minutes or so later, as the roast begins to color, begin basting with the marinade and do so until the marinade is nearly disappeared. The liquid will dissolve the caramelized meat juices, reducing to a syrupy consistency and the meat will acquire a rich glossy surface; basting and roasting should be conducted in such a way that practically no juice remains in the roasting pan when the roast is done. What little juice remains in the pan should be poured over the roast at the time as serving, so that as the meat is carved the juices that flow from within will mingle with the basting juices, a spoonful or so taken from the tilted platter to pour over each serving.

Carve at the table. Hold the bone end, wrapped in a tea towel or napkin while slicing thinly, always away from yourself, at a sharp angle almost parallel to the bone, first removing the number of slices desired from the thick, rounded fleshy section of the leg and then turning it around to slice in the same way from the thinner, more elongated muscle on the opposite side of the bone, and finally cutting from the bone outward near the point at which it is gripped. each of these sections has a different flavor and because of the construction of the leg, a different degree of doneness.